In 1987, an ambitious young man of 17 started his journey for systematic and strict training of traditional Chinese cooking in Shanghai. Known for its sophistication and complexity, Chinese cuisine cannot be mastered without continual intense practice, covering everything from selecting ingredients to cutting skills and choosing the proper heat, from seasoning to the insights of different styles. As a novice, young Chef John realized the key words behind being a real master: diligence, persistence, and never stopping. Those were the only secrets needed if he wanted to play his part in the historical arena of Chinese culinary art.

During his training years, he never forgot the teachings of his mentor, of “Cooking ethics first, skills second”. “A master, no matter the industry, is about ethics, not just skills.” Chef John said, “Ethics first. If you regard skill as the only goal, you will never be accepted by a good mentor. I’m lucky to learn the instruction and enlightenment from my mentor. In the cooking world, your dish will reflect the texture of your personality. A good man will be blessed, as an ethical cook who will be empowered with endless strength and inspiration."

Chinese culinary art is a boundless universe of over 20 cooking skills for endless taste variations that can be extracted in six words: color, flavor, taste, concept, styling, and nutrition. As the old saying goes: Master only opens the door for a long journey. Learning to cook is also self-cultivation. Among the eight styles of Chinese cuisines, Chef John focused on those of Guangdong, Huaiyang, and Shanghai. As a newcomer to a professional cook, Chef John surprised the peers and seniors who praised him as a Future Eagle, thanks to his exceptional talent and power of comprehension, as well as his hardworking attitude, out-of-box thinking, and the courage to explore. The Chinese culinary industry in Shanghai, an international metropolis, entered a golden time in the 1990s. Being a pioneer on the impressive culinary scene, Chef John became a chef in a five-start hotel, a position that gave him opportunities to engage with top chefs for more sophisticated skills.

That is how his career went during the decade. As he reached higher goals, one after another, the simple yet ambitious dream from his youth kept emerging in his mind: to conquer the international culinary community with his excellent skills, and “to promote authentic Chinese cooking and demonstrate the beauty of Chinese cuisines across the world."

At the end of 2008, the full fledged “Future Eagle” started his American Dream in the Big Apple with his dreams and beliefs. It took great courage for the former popular chef in Shanghai to begin everything from scratch.

In 2009, with his amazing cooking skills and on-site performance, he won the Gold Award for Huaiyang cuisine at the heavily competitive International Chinese Culinary Competition, an annual event in which he later served on the judging panel for several terms.

During his exploration in the U.S., Chef John always kept a humble yet keen attitude to study the ingredients and cooking methods of western dishes. “Food is the wisdom from heaven to the human, so Chinese culinary art emphasizes the combination of heaven and human, the balance between yin and yang.” Chef John said, “Indeed, Chinese and western cuisines are significantly different, with their own styles and features.”

“Cook authentic cuisine, be a sincere person.” The instruction from his master has never been forgotten, even in the U.S. “Only an ethical chef will truly comprehend how exquisite cooking is and present the perfect flavor and taste of every dish.” However, the culinary community in mainland China is losing its ethics and integrity. “Chinese F&D industry has been notorious for inferior quality and cheating customers. To earn quick money and show off novelties, many restaurants degraded the traditional cooking skills.” Chef John said, “It’s rare to see chefs there spend hours to prepare soups, so instead, the original flavor of the ingredients are covered by MSG, chicken powder, and additives.” For Chef John, it has deviated from the traditional way of cooking.

At the end of 2009, he co-founded a Chinese restaurant in New Jersey, presenting dishes fusing the Chinese and western cooking methods to meet the tastes of the local dinners. His efforts won compliments from the food column of the New York Times. As the contributor of Chinese Cooking, as the Chinese Do wrote:

"THE REAL THING. Chef John’s has authentic Huaiyang cuisine, along with American Chinese fare. Not fortune cookie Chinese food. The kind actual Chinese eat in actual China. In the Huaiyang region, to be precise."

of Clicks on Social Network 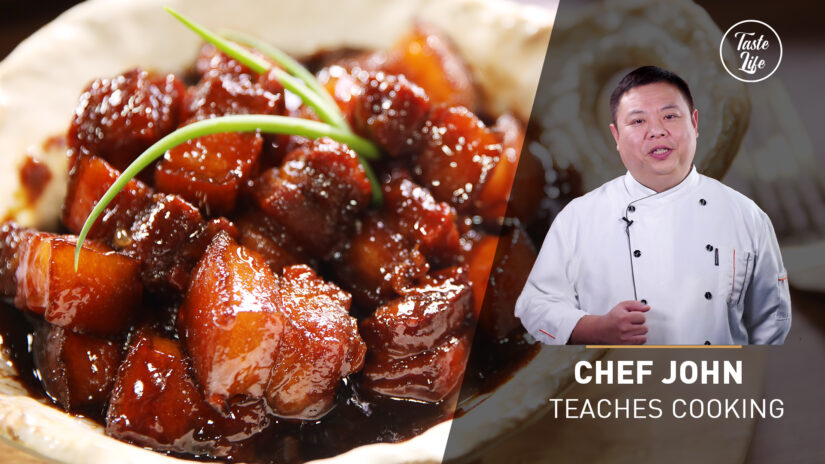 The year 2017 was another turning point for Chef John. He fulfilled his aspirations of years to promote the Chinese culinary tradition by joining the Taste Show. With his cooking excellence and diversified and innovated dishes, he became the star chef of the channel with millions of followers, a real Internet celebrity of Chinese cuisine.

How to be unique amid the tons of food-based channels? “We are committed to tradition.” That is the agreed upon direction of the Taste Show Team. With his rich experience and expertise, Chef John demonstrated his perfect cooking skills in the kitchen to audiences across the world. Fries, stews, dazzling creations, perfect cutting skills... He successfully won the world's attention with more than 1,000 mouth-watering dishes, including several videos with hundreds of millions of clicks.

For the past three years, Taste Show had enjoyed rapid growth, thanks to the sincere support and loyalty of the fans. Other than producing more videos, Chef John also wishes he could meet the fans in person and share with them the real delicacies.

That was also the wish of so many fans in their comments. One of his popular videos was about making a “secret” XO sauce. A fan commented:

"Wish you could sell some 'handmade XO sauce by Chef John' in the market so I could buy it instead of dreaming about how tasty it is made under your magic hands."

“Sauce, the master of eight cooking methods.” The old Chinese saying highlights the importance of sauce in cooking. “As a gift from heaven, the history of sauce in China can be tracked back to thousands of years ago,” Chef John explained. He expects that his skills will reach more families in the future. Chef John was lucky enough to find a partner sharing the same entrepreneurial spirit in his golden age. Actually, they were brought together by their common aspirations and ideas in cooking. Their original purpose was: Using sauce to create ever-changing delicacies is a simple way to satisfy taste buds. It enables everyone a great chef. “Be a sincere person, cook an authentic dish, and craft a tasty sauce!” Chef John has never changed his philosophy of being a serious and grounded artisan to create the best sauces with the best ingredients, sharing the delicious joy with fans.

Making sauce is like extracting time in a bottle, requiring patience and perseverance for the most satisfactory result. With his more than 30 years of understanding food, Chef John excellently injected his skills into every sauce. By improving and using innovation with the traditional Chinese sauce-making technique, he uniquely mixed the ingredients from China and the western world, balancing the natural flavors perfectly. His sauce collection presents different yet great flavors after his long research and formula development.

Chef John, now a brand, was born in the energetic land of North America. The first launch includes several choices, while business across North America and Asia is on the way. He would like to create a “Chef John Cuisine Universe” with fans and food lovers across the world.

There are  item(s) in your cart

No Items in cart